Still, thinking if RPA is right for your business’s future? Learn the newest Robotic Process Automation statistics and crispy-fresh data to determine its value. 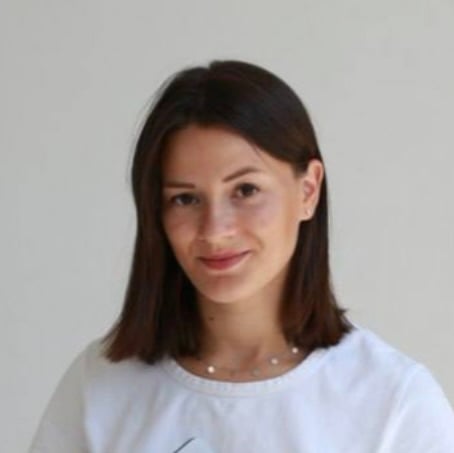 Robotic Process Automation today plays a massive role in strengthening and transforming companies around the world.

But what is the actual, quantifiable impact of automation on industries? How deep are markets penetrated? And how is technology progressing?

In this article, we’ll go over all of the newest Robotic Process Automation statistics and crispy-fresh data to help you determine if RPA is right for your business’s future.

The State Of RPA Implementation

Here are the key facts on the topic of the current RPA adoption, the estimate for future adoptions, and its results:

2. Around 80% of finance leaders have implemented or are planning to implement RPA. (Gartner**)
Read more about implementing RPA in finance, what are the benefits.

See the automation ideas for the finance industry.

4. 78% of those who have already implemented RPA expect to significantly increase investment in RPA over the next three years. (Deloitte Global RPA Survey)

7. The market for RPA in Healthcare is driven by the increasing demand to automate claims and process management. RPA vendors are focusing on developing best-in-class intelligent process automation bots. (Research and Markets)

8. 41% of companies won’t switch to RPA because of a lack of clarity of the business process

9. More than 90% of C-level executives report some level of intelligent automation already exists within their organizations. (IBM)

10. 38% of upper-managers in the insurance industry is considering implementing RPA solutions in their businesses

11. 50% of RPA opportunities are being missed (Software Testing and Big Data Hadoop) 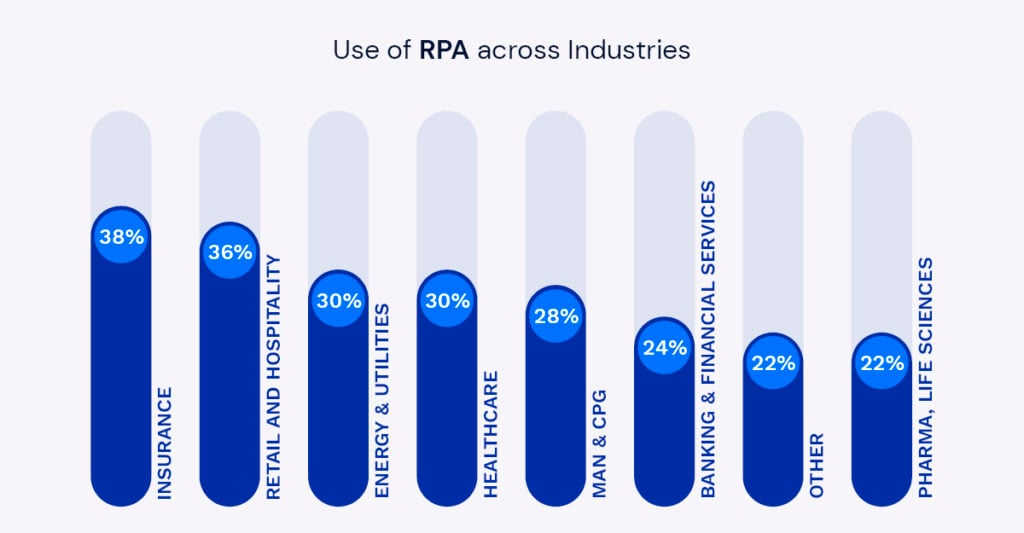 12. A total of 61% of participants reported their expectations of cost reduction being met or exceeded. (Deloitte Global RPA Survey)

13. 63% of participants plan to engage with an implementation partner to support their RPA implementation, while 19% plan to use RPA vendors for support, and 15% will handle RPA internally. (Deloitte Global RPA Survey)

15. 38% of managers report compliance improvements are the leading benefit of RPA and it is followed by improved productivity/performance (27%) (NICE)

17. 80% of the automation effort which is focused on exception handling, can be improved thanks to better process understanding. (QPR) Source

18. Improved compliance, quality, and productivity are the main reasons for CxOs in implementing RPA solutions

It is common knowledge that RPA has enormous financial benefits. Let’s check out the facts that back them up.

19. By 2024, organizations will lower operational costs by 30% by combining hyper-automation technologies with redesigned operational processes. (Gartner***)

20. Organizations that have piloted RPA expect, on average, a 9-month payback period while, in reality, the payback achieved by those that have implemented and scaled RPA has been 12 months. (Deloitte Global RPA Survey)

21. Workers spend 4 hours and 38 minutes per week on average performing duplicate tasks that could be automated 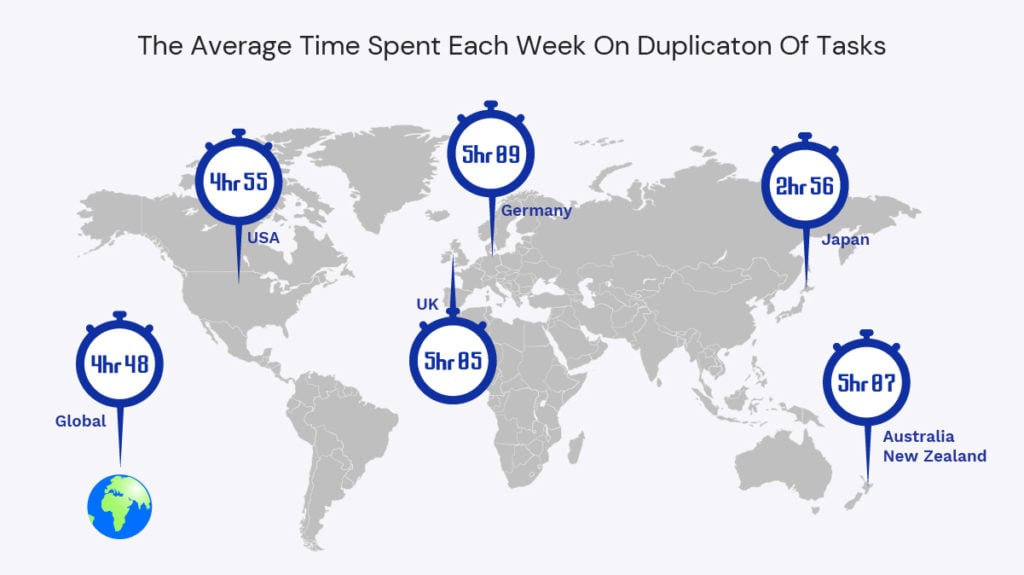 22. There is an expectation that robots could deliver a significant portion of current transactional activities. On average, the expectation is that 20% of FTE capacity could be provided by robots. (Deloitte Global RPA Survey)

23. Those who implemented RPA believe that 52% of FTE capacity could be provided by robots. This can enable the human workforce to be redeployed to more value-adding activities. (Deloitte Global RPA Survey)

25. One case study by SSCON found that scalability, however, was “unbeatable” – the robotic workforce could be “doubled almost instantly” prior to product launches

Regardless of how much influence RPA is predicted to have on industries, there are still some challenges to its implementation.

28. Only 3% of organizations have scaled their digital workforce. (Deloitte Global RPA Survey)

30. Only 17% of respondents faced some employee resistance when it comes to piloting RPA. This dropped to only 3% with respondents who were implementing or scaling RPA. (Deloitte Global RPA Survey)

31. For the majority of organizations (63%), implementation will involve working alongside a dedicated third-party partner due to a lack of specialist skills. (Deloitte Global RPA Survey)

32. Most executives believe that their organization does not have the necessary data science, machine learning, and other AI/cognitive skills for process automation. Percentages of executives who think their lack a specific skill set for each automation capability are:

33. Only 20% of executives surveyed have yet to establish plans to retrain or reskill their workforce. (IBM)

For more RPA challenges and pitfalls, please see our RPA use cases. 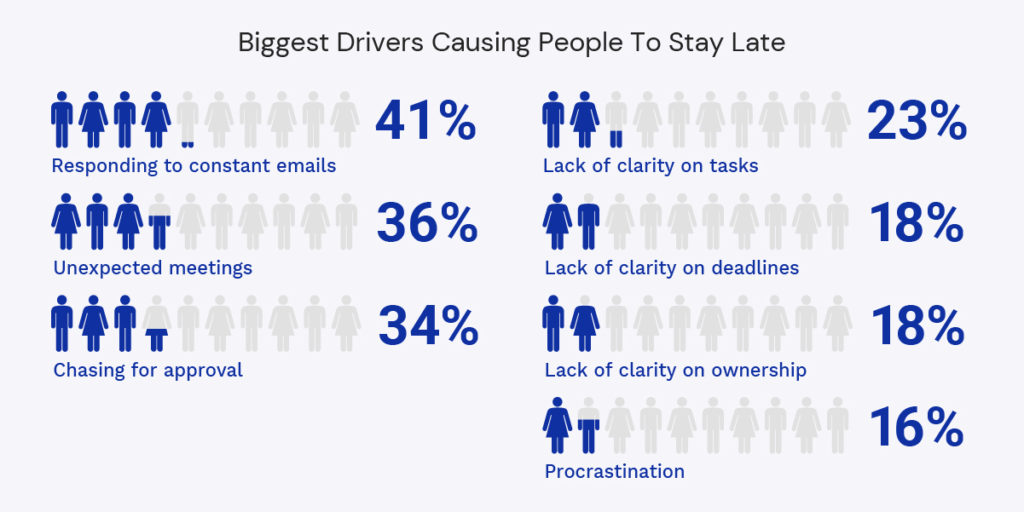 34. SAP Concur research found that the typical SMBs have a 1.29% duplication rate in processing invoices. Since the average amount on those invoices was $2,034, SMBs are looking at about $12,000 lost per month if each duplicate invoice is paid. 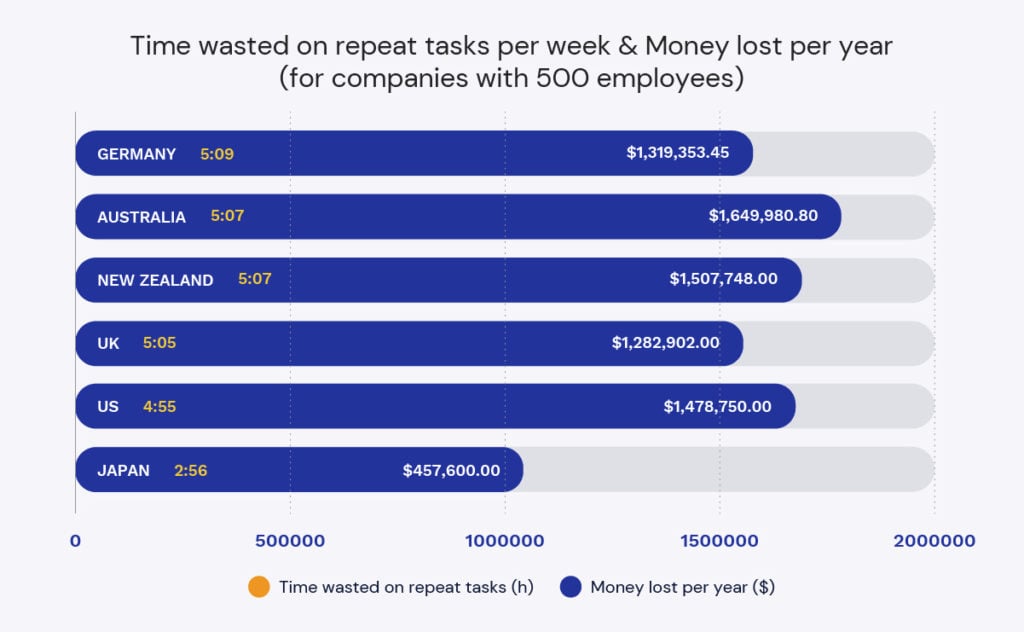 36. 3% of respondents said they’ve scaled their digital workforce – meaning the bots that perform work as digital employees, much like human employees – to this point.

37. 12 months The Deloitte survey found payback on RPA investments occurring at less than 12 months, with bots delivering an average of 20 percent full-time equivalent capacity in the process.

39. RPA opportunities exist in many business functions, but some departments have developed a particularly keen interest in technology. More than 70 percent of finance organizations have piloted or are actively using RPA, according to Gartner. Some big names are taking note; Ernst & Young has a whitepaper on RPA in finance and accounting, for example.

41. The global RPA market is expected to reach 10 billion worth of value in 2023 (Statista) 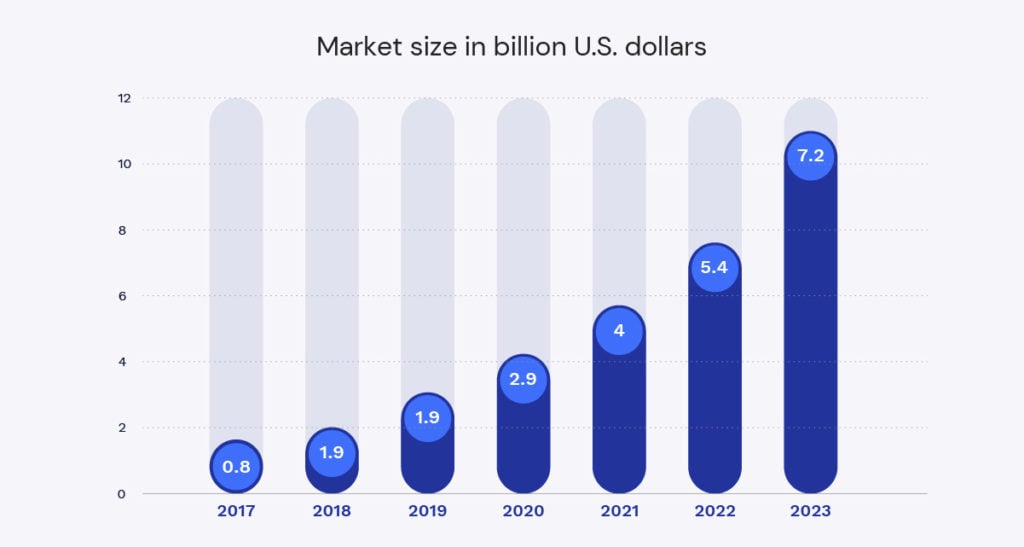 43. NASSCOM reports extensive cost savings of up to 65% for onshore operations, 30% in offshore delivery, and investment recovery in as short as 6 months.

44. The Institute for Robotic Process Automation claims that RPA software robots cost much less than human full-time employees – 1/5 the cost of onshore workers and 1/3 the price of offshore workers.

45. Automation will not displace employees, however, it is expected that 861,000 public sector jobs will be lost to automation by 2030 saving £17 billion off the public sector payments in 2030. (Deloitte State of the State report)

50. Other companies, such as Antworks and SaltStack, have received upwards of $15 million and $28 million, respectively.

Statistics bring clarity to any context.

The above numbers are an overall representation of how far RPA has come and how long it still has to go. RPA can be implemented in any industry that has repetitive mandate tasks which take your time, money and people.

Learn more about the processes in the healthcare industry you didn’t know can be automated.

We hope this list of RPA stats has opened your eyes to the ever-growing market in front of us and to the opportunities that lay ahead. From our standpoint, this is just the beginning…Reach out to our RPA consultants and get a free consultation now!

Content Manager at Flobotics. A researcher of automation implementations across industries and their impact. Marketing & dog lover.

The state of RPA Implementation 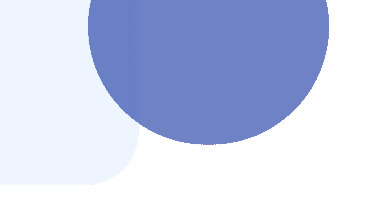 Statistics show that RPA is disrupting industries all over the spectrum. Read more about RPA and how your business can benefit from automation

The RPA is disrupting industries all over the spectrum.
Are you ready to join the race?

Get your process automated

How To Pick a Process for Automation?